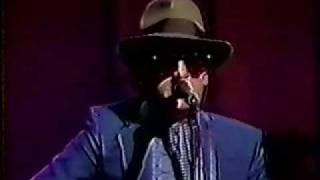 I first heard of George Jones when I picked up Elvis Costello's "Almost Blue" album in 1981. This album was sort of my entry point to the world of honky tonk music. Many of the artists that EC covered on "Almost Blue"ended up having a profound effect on me: Hag, Gram Parsons, The Flying Burritto Brothers, Hank Williams, and, of course, the Possum, as George was fondly called. I didn't, however, really get into George Jones until ten years or so later when I found myself drivi